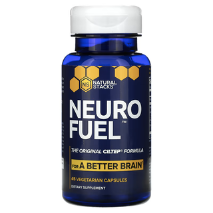 Whether you’re looking to learn a new skill, get a promotion at work, or get back to doing more of the things you love. NEUROFUEL can help. Users often report:

All it takes is two capsules on an empty stomach before your work or focus session. Thirty minutes later, you’ll feel the fuel go to work.

How It Works
NEUROFUEL provides your body the natural ingredients it needs to fuel a process known as Long Term Potentiation (LTP). It is regarded by many as the key to learning new things and retaining that information.

That’s why we say “FEEL THE FUEL”.

When LTP is enhanced; you’ll be alert, intellectually curious, and feel more creative.

Artichoke extract contains Luteolin, a natural inhibitor of PDE4 . PDE4 is an enzyme that breaks down cAMP molecules, messenger systems that relay signals in the brain. Studies have correlated lower levels of the enzyme PDE4 to significant increases in normal mental performance, including increased cognition, improved long term memory, increased wakefulness, and neuroprotection. Forskolin is derived from the plant Coleus forskohlii which has been widely used in traditional Ayurvedic medicine. It has also has been extensively studied due to its ability to increase levels of intracellular cAMP molecules. Combined with Luteolin from Artichoke Extract, forskolin is theorized to synergistically increase the duration of cAMP in neurons. Acetyl-L-Carnitine is an acetylated form of the amino acid L-Carnitine that has been shown to cross the blood brain barrier. Known for its roles in energy metabolism and mitochondrial protection, helps combat feelings of brain fog and fatigue.  L-Phenylalanine is an essential building block for the neurotransmitter dopamine.

Not intended to diagnose, treat, cure, or prevent disease. For educational purposes only. Consult your healthcare provider before taking nutritional supplements.

Have no product in the cart!
0